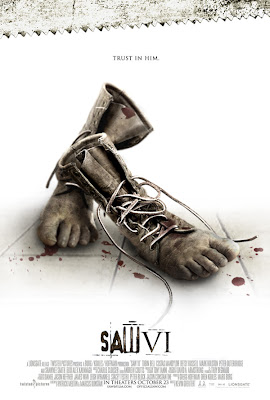 Saw VI last night. I have only seen Saw I and Saw II previous to this one. This was hella confusing. Where before you had the annoying dying of cancer man Jigsaw, now he's dead (not that you would know it due to him being in videos, and flashbacks lots and lots) there seems to be about a billion people doing Jigsaws work now. There's his wife, a Detective, a druggy, a suicide victim (though half of these are probably killed in previous films, maybe?) all off devising torture games on people judged as not valuing life. I don't know how many of these flashbacks are actually clips from previous films, but the whole of VI feels like it's midway through a series, rather than a stand alone film. This is my fault though, as I have had plenty of time to see the previous ones.

The basic plot for this one is that a man who threatened to stop John's (Jigsaw) health insurance if he went ahead to have some new untested cancer treatment (in the past) is kidnapped and put into a 'game'. He has an hour to play through 4 tests. If he succeeds he gets to see his family again, if he fails, well that's obvious. The tests usually involve having to make choices over friends and co-workers he knows, 'playing God' as it were (this is what John described the mans actions as, deciding who shall live and who shall die based on his health insurance formula he devised). Of course this leads to self inflicted torture, and violence. The unrelated 'game' at the start of the film set for 2 debt collectors is by far the most grim and unsettling violence in the whole film, so all that comes afterwards is tame by comparison. The sub plot requires a knowledge of the previous films in the series. 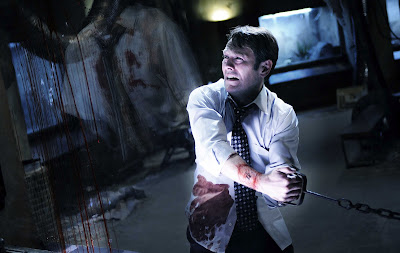 Saw I had a fantastic twist, Saw II had a clever twist. This has some twists, but nothing mind blowing. What I liked about Jigsaw previously is that it seemed he became this serial killer due to developing cancer and noticing that there were so many healthy people who just didn't seem to value their life. I may be mistaken, but it appears via the flashbacks that even before this occurred he was a nasty, vile man, taking away any mild respect for the man. He is just a horrid person, and all his evil stooges carrying on his work are also extremely unlikeable. As a result I felt more for the victims, no matter what stuff they had done previously, than the annoying serial killers.

The film was ok, it looks great, but I felt I did loose a lot not having watched III, IV, and V.

Posted by Daniel Simmonds at 03:25

As a financial planner, I totally understand where you're coming from.
I read your site fairly often and I enjoy your posts.
I shared this on twitter and my followers enjoyed
it too. Kepp up the good work!

Thanks for the kind words, appreciated.