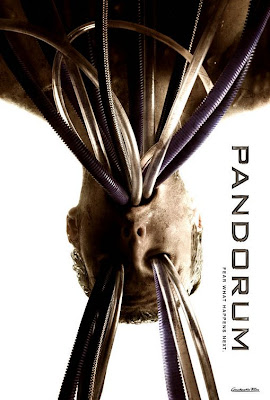 Due to the devious nature of my local cinema I had to see Pandorum yesterday. I wanted to see it anyway, don't get me wrong, it's just I really want to see Zombie World first. I shall see that tonight. The trailers for Pandorum made it seem basically like Dead Space (excellent survival horror game set on a deserted Spaceship) turned into a film. It pretty much was this with dashes of Prey (first person shooter set on a Alien Spaceship).

A man wakes up from a stasis machine on a Spaceship. He has lost his memory, and he is alone. From his stasis pod he discovers his name, and he finds his locker, which has his uniform, and a photo of a beautiful woman. Soon after another stasis pod opens up. The man in this one also has no memory, but together they work out he's the commanding officer, and that they are both part of the ships flight crew. The first man realises hes the flight technician, and also that the regular power fluctuations are being caused by the ships generator failing. He has to work through the massive ship to get to the generator to stop it from failing completely and leaving them stranded in deep space. Soon after he heads out though he discovers the ship is full of demonic creatures. Through the film he has to look for answers to all his questions - why is the ship full of monsters? Where are all the ships passengers? (of which there were 60,000 ) Where exactly is the ship heading? and also to get back his missing memory. 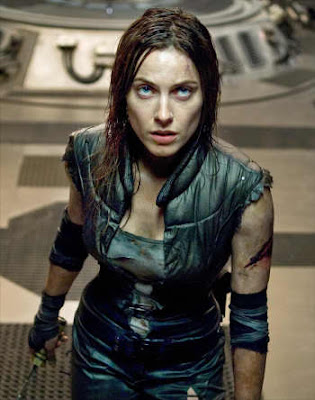 The film also reminded me a lot of The Last Man on Earth. The man eventually meets up with other survivors, a scientist whose pod released her 6 months previously, and a foreign farmer who speaks no English. Together they have to evade the horde of Albino like mutants and get to the generator. The ship is gigantic, and seemingly made up of narrow passages and tunnels. Whenever the survivors get cornered there is always a handy passage to escape down. There are many twists, though most are kinda obvious. The film is mostly set in the dark (due to the ships generator being on the blink) but despite this it is always shot well enough that you can tell what is happening. The mutants are never really frightening though. They come across as quite dumb and are easily avoided despite their vast numbers.

It has been ages since I saw a sci-fi horror though, so I did enjoy this, and the cast are all attractive (obviously not the mutants), and the story is intriguing enough to keep you interested up to the end.

Posted by Daniel Simmonds at 02:56