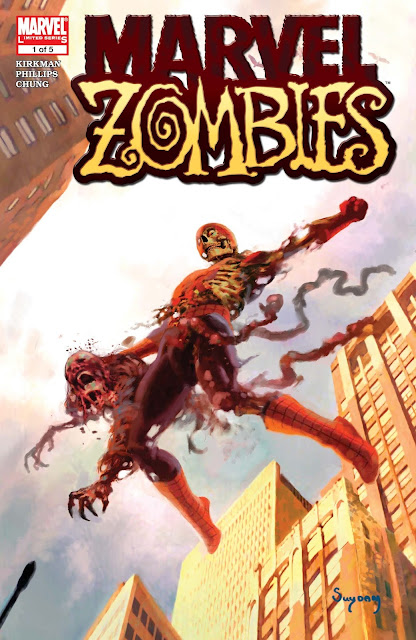 Marvel Zombies is unsurprisingly a book which involves zombies, and is set in the Marvel universe. I think (but am not sure) that the Marvel Zombies series is a spin off from a Fantastic 4 story in which they travelled to an alternate dimension where a virus had turned the inhabitants of Earth into flesh hungry zombies (I am of course making this up, as I have never read it). In this alternate universe the only people left alive/undead are the hundreds of Super Heroes and Super Villains as keeping their super powers after their change into zombies they easily killed and ate everyone else in the world. What I do know is that thanks to Magneto (one of the last humans left) the Fantastic 4 travelled back to their own dimension, and the dimension travelling machine thing was destroyed leaving the super zombies stranded in their dead world (edit 24/08/19 - all I said there does happen but wasn't the root cause of the outbreak).

The story was released in five parts, which are compiled in the Marvel Zombies graphic novel. Magneto is quickly eaten by the combined super zombies. The super zombies are led by zombie Iron Man, and include mainly Colonel America, Spider-Man, Wolverine, and Hulk (mostly Bruce Banner, he only changes into zombie Hulk when hungry). The world seems empty of fresh meat to eat, but this soon changes with the arrival of the Silver Surfer who announces the arrival of planet eater Galactus. When Galactus arrives he is furious that his servant has been eaten. The super zombies both good and bad though see Galactus as the ultimate meal...

The book is really quite gory in places, various super zombies lose various parts of their anatomy during the story. The script was done by the same man who does the script for the excellent The Walking Dead comic. Unlike that though, this story is really humorous in places. The super zombies conversations with each other is so absurd as to be hilarious, and seeing well known heroes and villains all zombied up is a great treat for fans.

The artwork is bright and vivid, and the story itself is silly, but cool. Well recommended. I shall definitely be getting Marvel Zombies 2!

Posted by Daniel Simmonds at 07:40