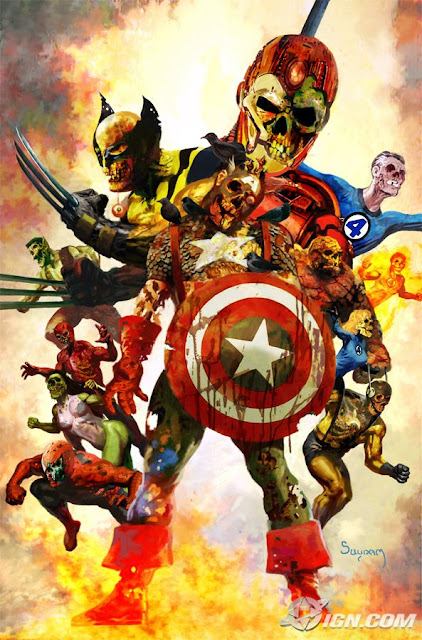 I said in my review of Marvel Zombies that I would definitely be getting the second one, and so I have. Headed to the local comic book store and picked it up. Noticed there are four Marvel Zombies comic books out now, and seems to be a 5th series currently in comic form.

The story picks up 40 years after the end of the first one. The Marvel super zombies have eaten every single thing in the entire universe. They decide to head back to Earth and try and get the dimensional portal there working so they can travel to a place with life. Meanwhile back on Earth the surviving humans are slowly descending into civil war over differences in opinion between the old adults, and the teenagers. The arrival of the super zombies leads to the undead creatures own civil war, as some are filled with guilt at all the billions of lives they have ended (such as Spider-Man) and decide to protect what's left of the human race from the evil super zombies.

Again the dialogue between the super zombies is hilarious, it's hard to explain, but the conversations they have are just laugh out loud funny. The script and artwork are done by the same people as the first, so it all looks fantastic. What is odd is that some of the main characters have been changed up. For example Gladiator is now a main character when he wasn't even in the first one. Thinking logically though, these additions could well be newer zombies created when the original cast attacked alien planets. I really don't have a good knowledge of the Marvel universe. Also in the first book the zombies absorbed powers of the Silver Surfer, yet some of the zombies who didn't do that still seem to have similar powers. These are small gripes though.

The plot is good, but not as exciting as the first, and the book ends on an obvious cliff hanger this time, where before everything was pretty much wrapped up. Again though, I'm definitely going to get the next in the series!

Posted by Daniel Simmonds at 04:21