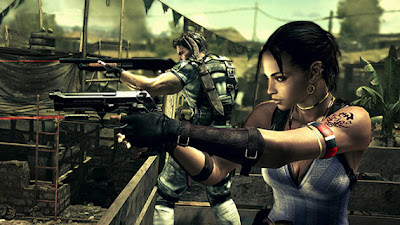 I finished Resident Evil 5 last Friday. Did it in 4 sessions. The game was longer than I expected, still about half the length of Resident Evil 4. Overall I was impressed, there was quite a few different locations, including one which really felt like it had been lifted out of a Tomb Raider game. The story was ok, tied up some loose ends. The last scene in the game was totally over the top, I can't decide if this is a good thing or bad thing though, it was either genius, or just too much.

There is lots of replay value. As well as achievements (as always) there are alternate costumes to unlock, lots of artwork to unlock, and weapons to unlock. Also I would love to play through it with a human ally, rather than the A.I. For most the game the A.I was bearable, but towards the end Sheeva really did turn into a hindrance, just getting in my way, stealing items she didn't need, and generally being a damn liability.

I had heard that the bosses were not up to much. I thought they were really good. Blatantly designed for 2 people, they were all memorable, and mostly enjoyable to play. The inventory system was too small, I miss the upgraded space Resident Evil 4 provided. There are only 9 spaces in the inventory for 5, and if you get a stab vest, and bullet proof vest then your slots decrease. Jill Valentine has blond hair for some reason in 5. It is really off putting, as in all the others her hair has been dark. I assume she must have dyed it for some reason, but she looks more like Samus from Metroid than Jill Valentine now.

There is new content coming out for the game. I think it will most likely be DLC. It has you as Chris Redfield and Jill Valentine infiltrating Oswald Spencer's European hideout. My only concern is how there can be any enemies in the place, as I doubt Spencer would have had zombies or monsters in his hideout. The trailer just shows traps, so maybe it will be enemy free.

I highly recommend this game, and if you ever need a co-op partner my gamer tag is Happyhead UK. It would get a perfect score but with the totally broken A.I partner I just cannot do that.