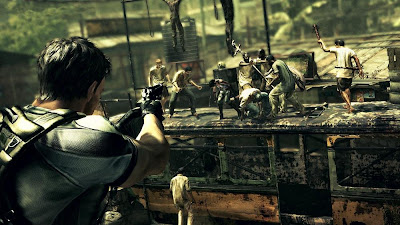 I am eating humble pie at the moment, I will admit that. I hated the demo of Resident Evil 5, the A.I was really bad, and the weapons seemed to have no effect on the zombies. My first impressions on playing the game proper are quite positive. The game is intended as a co-op game, but as I am only able to play the game in single player I shall just be giving my views from that spectrum.

You play as Chris Redfield who has teamed up with a woman called Sheeva to investigate a terrorist cell operating out of a remote South African township. Soon after arriving you quickly find out that the whole population of the town have been infected with a parasite that turns them into mindless zombies, much like the Ganados of Resident Evil 4. The story is quite cool so far, it's basic, but it goes along well.

I have only played up to the end of chapter 2 at the moment. I think there will probably be around 6 chapters, each split into 2 half's. So far the game has been very linear. This isn't a bad thing, and is well handled to trick you into thinking it is more open than it actually is. The squalid town you are in feels authentic, and feels more different from the Spanish town of the last game than I expected. The sound is great, I am impressed with the noise the main characters make when they move, sounds really bulky, which makes sense with all their equipment they are carrying. The enemies are quite similar to the last so far. There are normal villager zombies, as well as dogs and a crazed chainsaw villager. The bosses fit with the style of the last game, comprising so far of insect based monsters.

The inventory system is not so great. The live item change works quicker than the demo, but it's best really to give all the healing items to the A.I, as she is better at healing than me. What is annoying is that there doesn't seem to be anyway to get the A.I to use any weapon other than her pistol. Also the A.I doesn't seem able to use grenades which is odd. I can't seem to be able to rearrange weapons in my inventory which is also a tad odd.

Talking of A.I, it is ok for Sheeva. She heals well, and uses her lame pistol well, but in boss fights she becomes useless. One in particular required a character to get behind the boss to hurt it. Sheeva would say 'You distract it, I'll get behind' then proceeds to just stick to you like a lost lamb making the fight harder than it should be. She seems less greedy than the demo, only taking items if you don't pick them up first.

A lot of ideas are taken from 4. Rather than improve on the style of the previous game, it instead just copies. This isn't too much of a bad thing, but when sections are blatantly copied from 4 it is really noticeable.

One last thing for my first impressions - there is no cool shop keeper. He is sorely missed.
Posted by Daniel Simmonds at 03:28