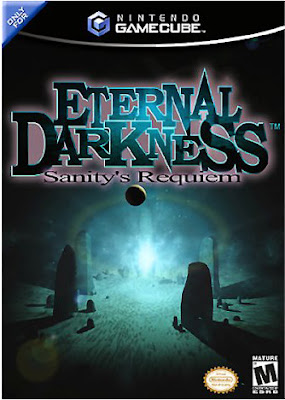 This was supposed to be the future of survival horror. Critically acclaimed at the time, and considered a cult classic now, Eternal Darkness is unfortunately a mediocre game put on a pedestal due to the lack of competition in the genre at the time on the Gamecube. The story is heavily influenced by the works of Edgar Allen Poe, and more specifically the master of horror H P Lovecraft.

After her Grandfathers mysterious and bloody death his niece travels to his mansion at Roade Island to try and discover who was responsible. In a hidden room she discovers a book bound in human flesh; a Tome of the Dead. Her Grandfather had a secret interest in the occult. Each chapter of the book tells the story of various people throughout time who have encountered the book. Each level of the game is based on one of these stories, being bookended each time with the girl in the present day exploring her relatives house. As such you get to play as over a dozen different characters throughout time. From a Roman Centurion in 54 BC, to an Amazon Dancer, a Medieval Monk, a World War 2 American Soldier and many more. Each time period contains a self contained story, mostly ending tragically ala' H P Lovecraft tales. 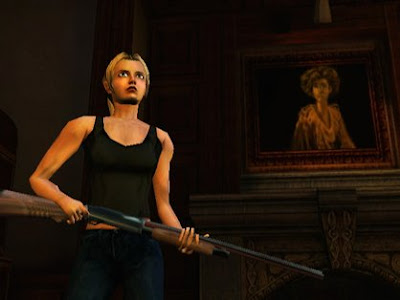 The plot itself is the games strongest point, each individual story is very well told, the best one springing to mind being an ancestor of the present day girls who discovers a hidden horrific desolate City of a past civilisation. This really felt like a version of the excellent short story 'At the Mountains of Madness' (by H P Lovecraft).

The graphics are smooth, but very bland. Considering the amazing looking Resident Evil games later showing up on the Gamecube there is no excuse for the graphics being so plain. The game was advertised as being at least 20 hours long in some previews, yet even on my first play through I had it finished in under 10 (not that length of game determines a games quality!) To get the true ending you have to play through the game 3 times, but to tell the truth, I just couldn't be bothered to do that. 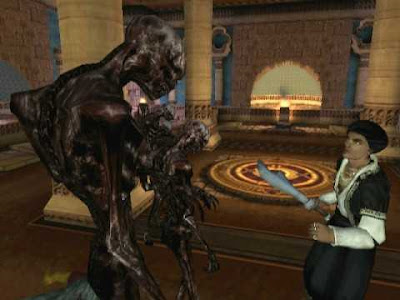 Much was made of the games sanity meter. The longer you spend around enemies in the game (mostly comprising of zombies) the more your sanity meter runs down. The lower it goes the more crazy stuff starts happening. The camera starts to shake drunkenly, a message pops up on screen saying the Gamecubes memory card has become corrupted, the game freezes and lots more random insanity occurs. This aspect of the game is kinda cool! (also aped in Metal Gear Solid 2)

Despite playing in many different periods of time, only about 4 different locations are used with minor changes used to differ the look. This leads to many parts of the game becoming stale as you traverse the same locations over and over again. The characters are only physically different, and virtually all control the same. The magic system is terrible! Some parts of the game require you use spells in specific places, it can be really hard to use them in the correct spot, and I literally spent 30 minutes at one part late in the game repeatedly failing to use a spell in exactly the right spot, and then having to wait an agonisingly long time for the magic meter to slowly recharge again. 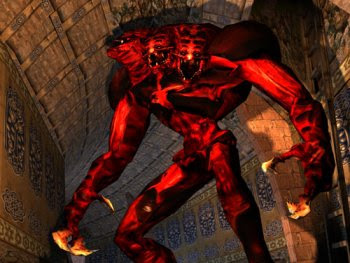 The game does have an ace story though, and is very cheap nowadays, so it is worth playing, if only for the story.