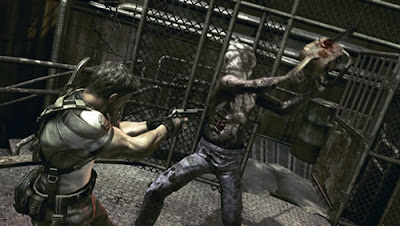 Day 2 of my Resident Evil 5 experience. I am renting the game, so am kinda rushing through it, as it needs to be back by months end. I am definitely going to be buying this now I've tried it.

On my 2nd session I worked through the Tribal Village. This area was the one which came under fire in the notorious 'Resident Evil is racist' furore which emerged on the games release. Personally it does not seem that way to me. In this section you arrive at a Tribal Village out in marsh lands. The village is made of wooden huts adorned with skulls and masks. The zombies in this area are the villagers. They are clad in grass skirts and masks and attack with spears and flaming arrows. This fitted in with the games style, and a file found explained why the villagers were dressed in this way. The only possible negative thing out of this was the pilfering of numerous statues in the village. White man heading to a indigenous people and stealing their gold. They were all zombies anyway so they don't need their gold.

I worked out the inventory control some more. The time before each level is your option to move around items and assign them to different buttons. It kinda works well this way.

There were yet more similarities to Resident Evil 4. Some of the tribal zombies had giant shields, they had to be dealt with the exact same way as the Monks in the previous game. A boss encountered was near identical to that of the last game. However the way you fought the boss was totally different. There was a section set on the back of a moving truck with you using a mounted gun. This was a fun distraction from the normal game, and I don't believe a section like this was in 4.

Wesker is even cooler in this game. Each time he reappears he gets cooler and cooler. If you thought he was amazing in Code Veronica you haven't seen anything yet! I am enjoying the game a lot, but I feel sad I will not get to play it in co-op as I could imagine it would be amazingly fun. No doubt yet more posts on this to follow.
Posted by Daniel Simmonds at 05:55