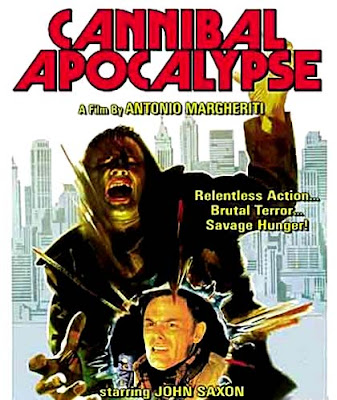 I saw Cannibal Apocalypse last night. The most plausible zombie film I have ever seen. For many years it was banned in the UK, and for many years the only version available in the USA was a ridiculously cut version. But now sense has prevailed and the film is available fully uncut.

The film starts off in Vietnam. A dramatic rescue of two American prisoners of war is elicited. However one of the rescued soldiers bites a chunk out of his rescuers arm. After this point the film moves to Atlanta, about six months later. One of the cannibal Americans has been released from the mental home he had been in. He immediately tries to contact his Captain from Vietnam (the man whose arm he bit) as they used to be buddies. The Captain wants nothing to do with him though, as he is suffering himself, having vivid nightmares, and generally feeling quite odd. The released man; Charles Bukowski now disappointed heads to a cinema where his urges overtake him and he attacks a woman; biting a chunk out of her neck. After dramatic action he is apprehended and re-admitted to the mental home. The police note his cannibalism which leads to the doctors realising anyone bitten by the two rescued POWs would have been infected by the same Rabies type virus. The infected POW's head out on a murderous rampage in an attempt to get back to Vietnam. 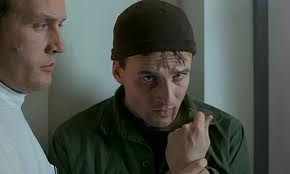 The film feels more plausible as the infected aren't undead, they are just infected. They remain rational, and can control their urges to an extent. Their infection leads to them having a near psychotic hate of all non infected, as well as the urge to feed on human flesh.

It is obvious to see which scenes got the film banned. It is an Italian film coming out the same time as City of the Living Dead and The Beyond. The violence is not disturbing now, if it ever was (or maybe I'm just desensitised). There's eye ball gouging, dismemberment, flesh tearing, and someone even gets their tongue bitten off! The film overall carries a melancholy tone, and I felt quite sad after seeing it, kinda depressing. A fantastic Goblin style soundtrack though. So many zombie films have excellent soundtracks, this is no different. 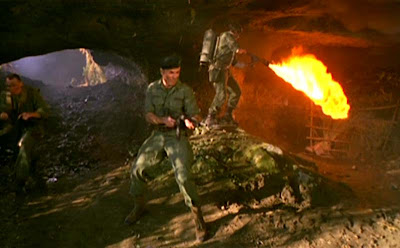 Very violent in places, but mostly downbeat, worth seeing for a different kind of zombie film.

Posted by Daniel Simmonds at 06:45