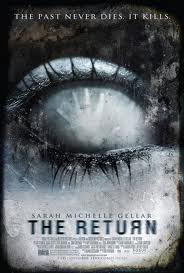 I picked this up on DVD cheaply the other day. The film stars Sarah Michelle Gellar as a young 24 year old woman who has been away from her home state of Texas for many years. She has stayed away for a reason, but a business deal brings her back to the state. Soon she starts having vivid hallucinations about a creepy stranger in blue jeans, and starts seeing her features change when looking in mirrors. It all seems linked to a small Texan town, and in particular a man whose wife was murdered many years previously.

The film is not in the least bit creepy, but it is a really nice film to watch. Gellar is fantastic as the kinda disturbed young woman. The plot is nothing exciting, but is brought to a satisfying conclusion without needing ridiculous twists or turns. Though nothing much happens, the film has a certain dream like quality to it.

If I was to pick a fault it would be that the chase sequences are designed to be thrilling, but are quite lame in actuality due to the plot point which leads to Gellar hiding rather than running away each chase sequence, of which there are many.

A short review, but a nice example of how much better my reviews are now!