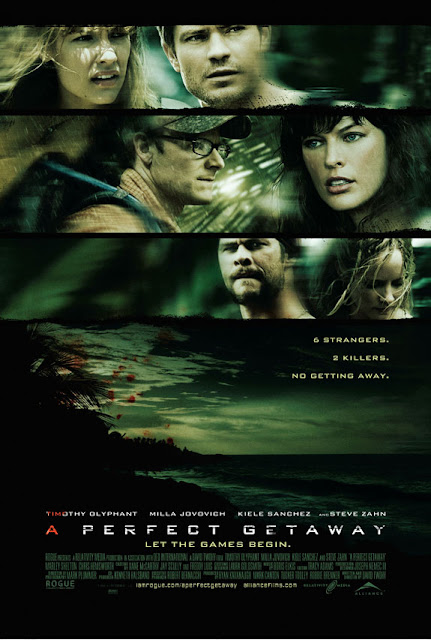 I hadn't actually seen the trailer for A Perfect Getaway at the cinema, though I had seen the trailer on TV a few times. To be honestit didn't make me particularly want to see the film, however due to lack of other options me, my sister, and her husband ended up watching it.


The film is a thriller set on an island in Hawaii. A newly married couple Cliff (Steve Zahn) and Cydney (Milla Jovovich - Resident Evil) have gone there on their honeymoon. Not long after getting to the remote, isolated island they discover via other tourists, and via the internet Cliff gets on his mobile that a newly wed couple were murdered on a nearby island by a duo, and that the murderers are predicted to have travelled to the island they are currently on. The pair meet another couple, Nick (Timothy Olyphant) and Gina. They decide to stay with them figuring there would be safety in numbers if it did happen that the killers were on their island. However it starts to seem more and more likely by the couples odd actions and stories that Nick and Gina may not be who they seem... 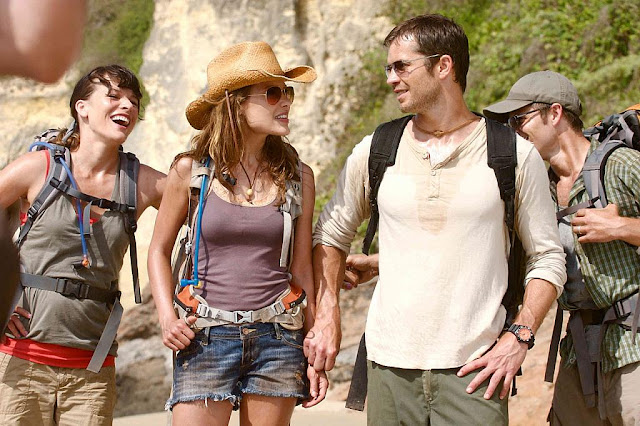 The film's scenery is beautiful; lush tropical forests, beaches, and mountains make the setting a paradise. The film is shot in a really cool way, a flashback later in the film is filmed totally in black and white which works really well at separating it from the bright colours of the present. Also there are some really nifty camera pulls, plus some 24 style screen splits. The cast is quite small, the four main characters, plus a handful of secondary characters. Jovovich and Olyphant in particular show really great acting. It wasn't till near the end of the film that I realised the character Cydney was played by Jovovich, as I'm used to her naff acting (eg: the Resident Evil trilogy) so assumed it couldn't possibly be her.


The plot is quite good, and the action ramps up to a thrilling conclusion, with cool twists. A Perfect Getaway was a very unique feeling thriller, with an excellent cast, and while not really scary, the characters are interesting enough that you care what happens to them.