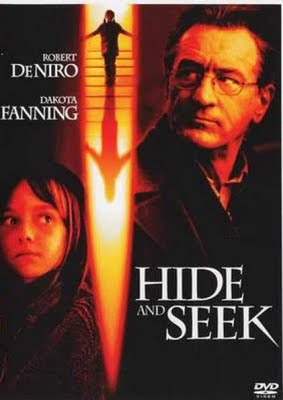 In my review of Orphan I said how it was good as it was different to the usual creepy child genre of films. Hide and Seek is a prime example of the stereotypical creepy child film.

Robert De Niro stars as the psychologist Dad of a creepy little girl. The little creepy girl is played by hollow eyed Dakota Fanning. I'm not a big fan of either of these two it has to be said. 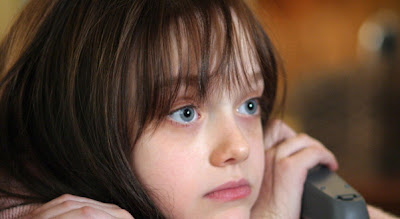 The film starts with De Niro's wife committing suicide in the bathtub. As a result he moves with his traumatised daughter out to the country, as he sees a new location as the best way for the child to get over the tragic event. His daughter is not that nice, mostly just staring at people in her hollow eyed way and disliking her father. Soon after moving into their new house the daughter starts talking with an imaginary friend she calls 'Charlie'. She tells her father that Charlie doesn't like him, he assumes it's just her resentment of him over the suicide. Much in the way of creepy child films it soon turns out that Charlie REALLY doesn't like the Dad, causing untold misfortune to him, which starts to take a more sinister turn. The daughter insists that all that is happening is due to her imaginary friend Charlie, and that she's innocent. It leads up to the usual twist, and the last 1/5 is much like the last 1/5 of Orphan.

The film is just too long, it got really boring in places, and the end part of the film just drags on and on and on. It wasn't a bad film, just not original in the slightest. The story wasn't anything new, and it was really obvious how it was going to turn out. 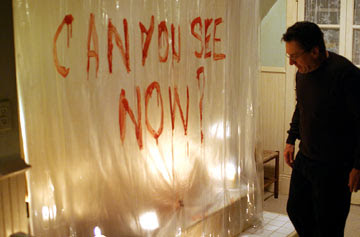 See it if you must, just don't expect much more than a well filmed, nice looking bland thriller.