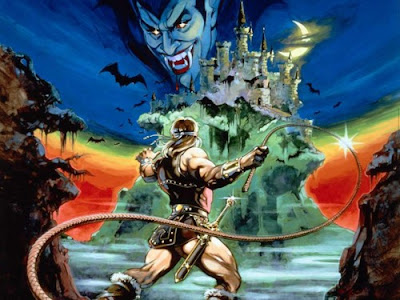 Welcome to the 2nd part in an intimate look at the key characters of the Platforming juggernaut 'Castlevania' (part one can be seen here).

A most over looked part of the Castlevania games is in fact the castle; Castlevania itself! This structure is another ally of Dracula. It is the physical embodiment of Chaos. This is most explicitly revealed in 'Aria of Sorrows' when Soma Cruz travels into Castlevanias psyche, and discovers at it's centre the being of Chaos. Once this monster is defeated the Castle collapses.

Usually it is Dracula's demise which triggers the manifestation of Chaos to collapse in on itself, no longer able to be sustained. 'Aria of Sorrows' is different in that Soma himself is the reincarnation of Dracula, so to destroy the castle, the core of it had to be destroyed. The castle is always seen to evaporate into the sky, this is because it is not so much collapsing, as ceasing to exist.

The reason the layout of Castlevania changes so drastically from game to game is thus easily explained. As the embodiment of chaos the castle is obviously going to not remain constant. Despite this, many areas of Castlevania do reappear in each manifestation. The entry halls, the underground catacombs, the clock tower, Dracula's throne room - these areas nearly always appear each time, though with the exception of Dracula's throne room they all appear with different layouts each time.

A notable exception to this is in 'The New Generation'. In this game you play one of two characters; either John Morris, or Lecarde. They are chasing Elizabeth Bartlett around the world as she attempts to gather the necessary tools to resurrect Dracula. Each location she travels to is warped into a monstrous version of itself (such as the leaning tower of Pisa of Italy, and the Versailles palace in France) This is either because as a relative of Dracula she is able to summon chaos where ever she goes, or that she is actually carrying the un-resurrected remains of Dracula with her, and as such merely his presence is creating the manifestation of chaos.
Posted by Daniel Simmonds at 09:10 No comments: 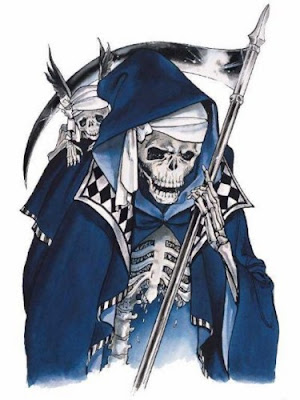 The Castlevania series of videogames has long been a favourite of mine. They are horror themed platformers, usually set in and around Dracula's home - Castlevania.

In the games Death has made a pact to serve Dracula. This is due to the fact that as an immortal Dracula never has to fear Death, and has become Death's master. In the origin game 'Lament of Innocence' (on Playstation 2) it is revealed that Death follows whoever has the Immortality rune, so when the master of the castle; Walter is defeated in that game Death is quick to reap his soul and pledge allegiance to the new master; Dracula. 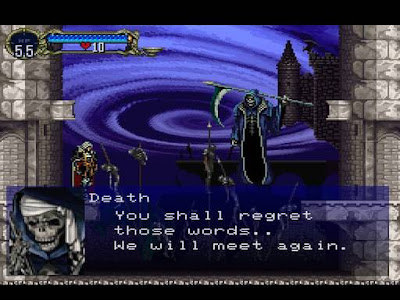 Death has appeared as a later boss in every single Castlevania game, usually being the penultimate boss, though in 'Lament of Innocence' he is actually the end of game boss. He appears as a floating skeleton in a dark cowl, armed with a scythe. He usually has a second form he changes into when he has taken enough damage. This is usually a 'hyper' version of his original form, though on occasion he has transformed into a skeletal monster. 'Portrait of Ruin' is notable as the first time Death and Dracula actually fight as a team together.

He is a loyal follower to Dracula which is demonstrated in a variety of ways. In 'Castlevania: The New Generation' he aids Elizabeth Bartlett in resurrecting Dracula. In 'Symphony of the Night' he ambushes Alucard and takes away all his powers. In 'Portrait of Ruin' he turns up at Castlevania as he has sensed the return of Dracula. 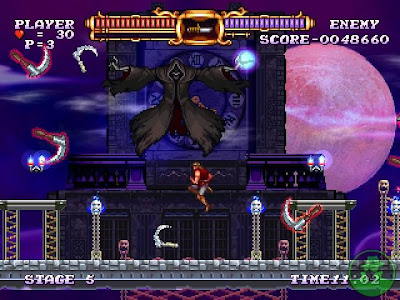 As long as there are Castlevania games there will be Death. Dracula just wouldn't be the same without his most trusted partner.
Posted by Daniel Simmonds at 08:12 No comments:

Through word of mouth I have come to watch Psychoville, a black comedy series from half of the League of Gentlemen.

Each episode focus's on 5 different storylines. There's Mr Jelly the clown with a hook for a hand, David; a man obsessed with serial killers, a midget with telekinetic powers, a blind old toy collector, and a Nurse who thinks the doll she carries around is a real baby. In the first episode each of these characters is sent a letter saying only 'I know what you did'. As the series progresses it is learned that these seemingly unrelated characters share a dark past. I have only seen upto episode 5, but am dying to find out just what happened, and who the mysterious letter sender is.
The humour is even blacker than The League of Gentlemen, it feels a lot like the Christmas special of that. Among the actors there is Reece Shearsmith, Steve Pemberton, and Dawn French.
I really cannot wait to see the remaining 2 episodes to see how the story pans out!
Posted by Daniel Simmonds at 12:43 No comments: I know it seems lazy of me lately to just be doing posts about the nightmares I've had, but they are legitimate, and so I feel they are of interest to horror enthusiasts. So without further ado here is what happened in my latest nightmare...

I was at my childhood home, I was being chased by a ferret sized centipede. It was transparent, and illuminous yellow. It kept spitting globs of acid goo at me. I ran upstairs and barricaded myself in a room. Eventually I opened the door to see the insect had vanished.

I went downstairs to the utility where there was a shower with the shower door closed. I undressed, and went to get in the shower. The floor of the shower was flooded with muddy, dirty water, there were quite a few rats sitting in this water....and then I awoke.

No zombies, but still kinda weird dream.
Posted by Daniel Simmonds at 04:10 No comments: I was at a gigantic wrestling stadium. Triple H was due to fight, but he couldn't be found, so I offered to pretend to be him and fight this weak guy. No one in the crowd realised I wasn't Triple H, and I did this great submission move on the guy I was fighting which everyone was real impressed with. After the fight Vince McMahn tells me to go to Triple H's dressing room as I would be pretending to be him in the main event.
Backstage is massive, I ask a man to lead me to the wrestlers area. He takes me out to this vast open swamp land. There are lots and lots of people around, real crowded. This scary girl with sharp pointy teeth tells me to follow her and runs off. I run after her, but am moving really slowly, like I'm running in water.
Eventually I arrive at this area of the swampland where there are many shallow dips in the ground. A necromancer is bringing the dead back to life, there faces are like jelly, all thier eyeballs hanging out thier sockets, and rotting runny skin. The girl is there, she reveals shes a zombie as well, and had led me here so that the necromancer would turn me into a zombie. I turn and start running away, she starts screaming her head off, an ear peircing scream. A thunderstorm starts, she curses the sky and says she hates being dead and just wants to be able to breathe again...
Then I awoke. As always was real scary, but I absolutly love zombie dreams! Two in one week. Hopefully this is a return to form for me. Zombies are soo cool!
Posted by Daniel Simmonds at 02:42 No comments:

For the first time in months I had a zombie dream. I used to have them a few times a week, so hope this is a return to form. This dream occured on 6th July.
As in all dreams this isn't exactually coherant.I was in a wooden shack on a cliff above a canal, the shack was near dark woods. I was Paris Hilton, and was with about 3 or 4 other people. They decided to head out, but I was too scared due to the zombies, so thought I would hide away in the shack. When the people leave I bolt the door shut behind them.
I am in dark woods, everywhere we look there are leathery, wrinkled zombies walking slowly about. We start running through them, and they are grabbing at us and surprising us, quite scary, thier eyes are so dead. We get back to the shack. A wall of the shack has been ripped off, and the entire shack is full of zombies, Paris Hilton has been ripped to pieces.
We get to some government/army installation with vast concrete corridoors, with lots of zombies stumbling about...
That's all I recall of my dream/nightmare, it was cool. Welcome back zombie dreams!
What it means... well here is my analysis. The woods featured as I can't go to zombiefest 2009 this year, zombiefest 2009 takes place in woods. I had watched a program earlier in the day where a Whale had been cut open, and its insides explored, I think the zombies relate to this. The government/army concrete base thing I think may have been influenced by Romeros Day of the Dead, and strangly also by the game 'Eternal Sonata' which I recently finished.
Posted by Daniel Simmonds at 15:33 No comments: 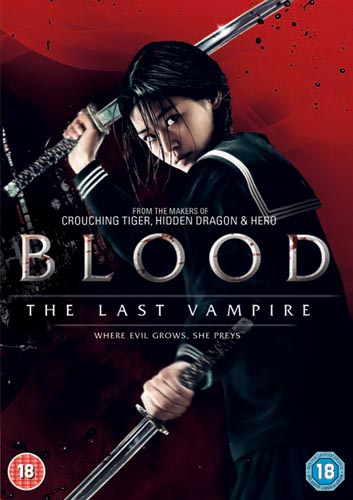 This film is a live action version of the anime of the same name (which come out around 2000). When I first saw the trailer for this I got kinda confused with Blood: The Last Vampire, and Vampire Hunter D. I have never seen the anime of this.

The trailer made the film look kinda like the Matrix's bullet time mixed with Kill Bill's sword fighting. It features the appallingly humorous running through the air effects which plague the Asian fighting films (eg: Crouching Tiger Hidden Dragon, Hero, House of 1000 Blades). This ability always looks so silly and so was a real put off. 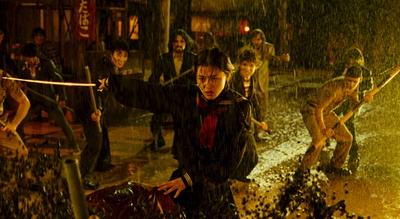 Blood: The Last Vampire was actually good, not great, but good. The plot concerns a half vampire/half human immortal girl who has pledged her life to killing vampires, and in particular hunting down the most evil and vilest of the Vampires - a centuries old Demon called Onechanba who was responsible for her father's death. The film is set in the 1970's, and has lots in common with Blade and Underworld but keeps it's anime styling in the transition from animation to live action. Many shots are styled similar to the animation, and there is plenty of over the top blood and violence with a particular highlight being a man sliced in half vertically with a sword in the opening sequence.

The film rushes on quickly, it seemed before the film had gotten going it was all over and the end credits rolling, but it was a fun ride. At first I wasn't sure if the film would be in Japanese, or dubbed, but it actually is mostly in English, which makes sense seeing as the vast majority of the film takes place in America (the Japanese characters do talk to each other in Japanese, which is good) The demon effects look kinda fake but are ok, and the action is entertaining to watch. 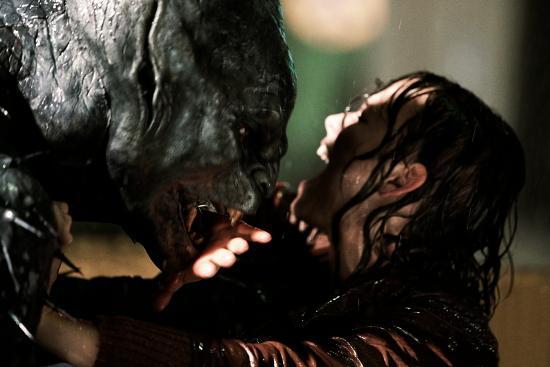 I will definitely be checking out the Anime original now to see how it compares. there are worse films out there than Blood: The Last Vampire for sure.