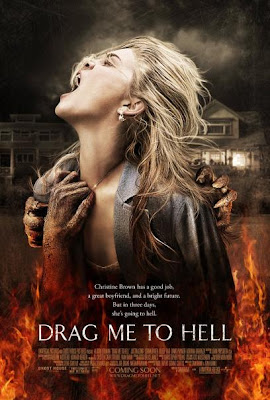 I saw a new film! Yes, I have gotten a unlimited cinema pass, so shall be seeing mostly new films from now on. Drag me to Hell has been out for a while. Theres an advertisement for it at a bus stop I pass on the way to work, I always think to myself 'drag me to Hell? I am in Hell already!' as I drive past it. Having got a unlimited cinema pass for Cineworld I made Drag me to Hell the first film I saw.
True to the title of the film the intro sequence sees a young boy literally dragged into Hell due to a harsh curse made by a group of Gypsies. The main storyline for the film is that a bank worker (attractive Alison Lohman) has also been cursed by a Gypsy. She finds that she has just 3 days before a Demon will arrive to drag her soul to Hell, so she must find an escape to her predicament. Her boyfriend in the film is played by the main character from Jeepers Creepers. 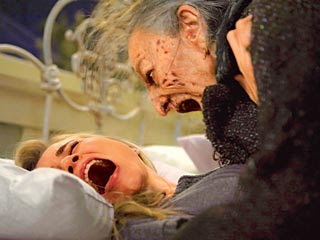 The film is kinda generic, and it is really obvious what is going to happen (though saying that, the ending was really cool). The characters all seem far too easy to dismiss all the weird stuff going on (Alison's boss seems to find the fact shes gushing blood out her nose not too strange for instance) and the film relies far too much on sudden scares to make you jump. There is quite a comedy recurring comedy character of a dead Gypsy who keeps appearing, intentionally comedic it lends itself well to the otherwise serious story. Where else can you see a corpse of an old woman puke up bile into a girls mouth?
I enjoyed the film, and it's directed by Sam Rami  for gawds sake!