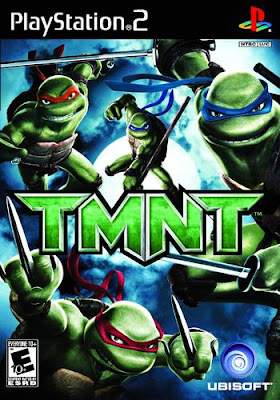 Hang on, I hear you cry, this is not horror! I disagree, 4 giant mutated Turtles rampaging round a city? Sounds like horror to me! Ok so it isn't horror at all, but there are plenty of Monsters in this game.

Teenage Mutant Hero Turtles was my favourite cartoon when I was a kid. A few years back a CG film was released, I haven't seen it, but it appears this game is the game of that movie, and includes cut scenes, as well as I assume the soundtrack, and story.

The basic plot is that the Turtles have kinda parted ways, but when an evil millionaire employs the Foot clan to seemingly help him open a portal to a alternate dimension they must unite once more.
The game has two different styles to it. Half the game is a 3D and sometimes 2D platformer. As one of the 4 turtles you leap and swing your way Prince of Persia style round New York. The other half of the game is a 3d brawler. Every so often you will come into an arena where waves of enemies will attack you, though there's only really 1 button to use to attack. 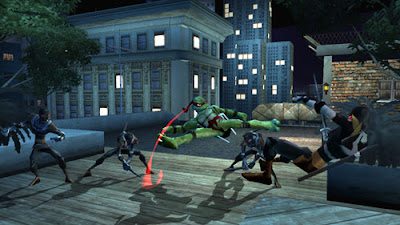 The game is very easy, but to make up for this, it is also thankfully amazingly fun. True, a large amount of levels take place on New York rooftops, but there is still variety. It is a good design choice to keep the platforming, and fighting enemies separate. The platforming in particular is really cool. The turtles can run along walls, swing from poles, and basically do anything the prince can do. The soundtrack is also a real highlight, and for a PS2 game it looks amazing!


Tesco's had reduced the price of all it's PS2 games to just £3, so was quite a bargain. As a side note, bizarrely it seems Shredder is dead pre game, you fight him in a flash back, but that's his only appearance.