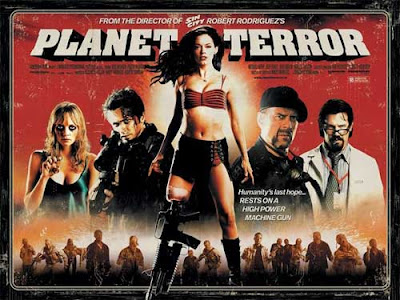 
Planet Terror is a zombie film. Zombie films are great! The zombies vary quite a bit, and seem conscious of their actions rather than mindless, being able to talk, and use weapons. The film is really authentic in it's style, similar to the videogame 'House of the Dead:Overkill'. The whole film has a grainy look to it, right from the retro title credits, all the way to the end, and even includes a broken reel scene, where the film cuts out and comes back much later on in the film which is used to comic effect (for example the Sheriff who had detested the main hero has apparently had some big revelation during the missing scene and now thinks the main hero is amazing). The film is very funny, and knowing in it's nods to the grindhouse films. 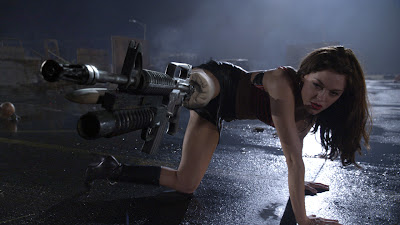 The film features several guest appearances, among them are Bruce Willis, Tom Savani, and Quentin Tarantino. Worth seeing just for the girl who has a machine gun for a leg!