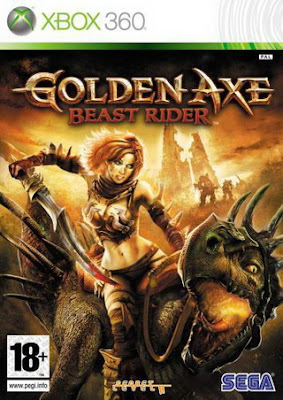 Golden Axe: Beast Rider is the new version of the classic Golden Axe games. The original trilogy were classic side scrolling brawlers, very fun in 2 player, they had fantastic music and sound effects (the original actually used sound bytes from Rambo and Conan the Barbarian!). I knew this was not going to be anywhere near as good as the originals, having received mediocre reviews. I really enjoyed the 'making of' videos for this game, and seeing it cheap I picked it up.


The game is a 3d brawler, kinda like Devil May Cry-Lite. It sees you as Tyris Flare (the Amazon from the originals) berserking over the land on a quest to rescue your Dragon God (who has been kidnapped) and avenge your clans death by defeating the evil Death Adder. Unfortunately the game is single player only, a real missed opportunity, the Dwarf Gilius Thunderhead, and the Ax Battler only turn up in cut-scenes. 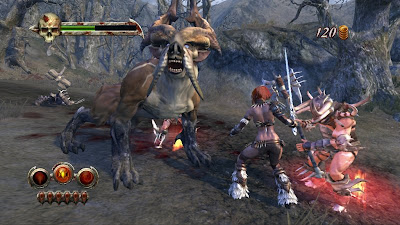 The bad things first then - as I said no multi player mode. The music is really generic and rubbish, it's also really quiet for some weird reason. The locations are quite bland, and there is far too many open areas, and no levels set in castles like the originals. The boss battles are really fun, but there just isn't enough of them, which is a shame as for the originals the bosses were mostly fantastic. Death Adder in particular was real fun to fight, though nothing beats his amazing appearance as the end of game boss in Golden Axe 2.
There is a good variety of enemies. Right up to the end new enemy types are being introduced which keep the game feeling fresh. The game is quite violent with Tyris ripping enemies in half left right and centre. She has her fire magic from the originals which is fun to use. As you go through the game you collect gold from treasure chests and defeated enemies which opens up access to better magic, and also access to more revealing costumes for Tyris (by the end of the game shes wearing virtually nothing which isn't really sensible of her). 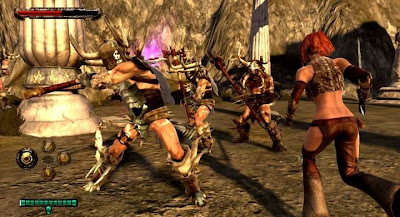 The Beasts of the title are quite fun to use. As well as the fire breathing and whip tail beasts from the original come cool Gorilla type beasts, and Rhino Beasts. They are very violent in thier attacks, and a welcome reprieve from the button bashing nature of the game normally.
The game features the thieves from the original who you are able to attack to collect chicken legs, gold and potions from by hitting them, they even have their trademark jaunty theme play when they appear. 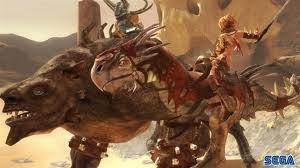 I did enjoy this game, though it is certainly not a great game, and not a patch on the originals.