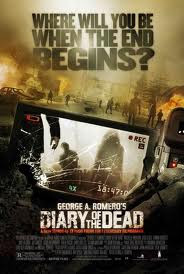 I long put off seeing this; George Romero's 5th entry in his '...of the dead' series. The first 3 where fantastic, and still are. The 4th one 'Land of the Dead' however was utterly terrible and over produced.


'Diary of the Dead' is shot in a 'Blair Witch Project' style (or I guess 'The Last Broadcast' as that came first). I mean that it's shot entirely from hand held cameras and security cameras. This came out around the same time as 'The Zombie Diaries'. The zombie diaries also is shot via hand held cameras, unfortunately it had no budget, and suffered with some very boring sections. I managed to buy 2 copies of The Zombie Diaries as got confused with the title of that and this one! 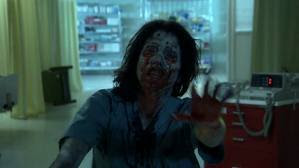 I found this quite cheap in Tesco's, so I picked it up (along with 'Planet Terror'). This film is really good! Having a budget really helps, the film has a storyline, the cameras don't suffer from the usual shaky movements these films have, and the zombies look like zombies.
A group of film students find themselves in the middle of a zombie apocalypse. At first they are disbelieving, and think all the news reports are hoax's, but it soon becomes apparent that it is really happening. One of the students records their adventure as he wants to preserve their journey, and is mostly shot from his perspective. He comes across as a real douche, filming his friends being attacked rather than help them. His escape from the terrors is by hiding behind the camera is how I see it. 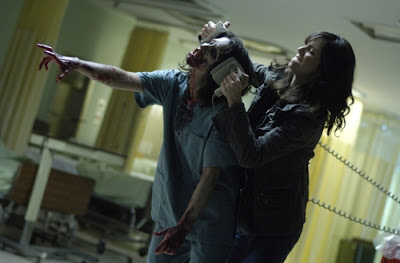 Anyway I am blabbering. The film is entertaining and is intercut with news reports from around the globe which give greater depth to the apocalypse. A return to the series roots, a re-imagining of 'Night of the Living Dead' set in modern day, recommended!