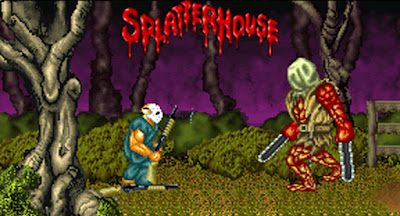 I was a huge huge fan of Splatterhouse 2, well, I still am. In fact I think that game was a contributing factor into getting me into horror films, it is littered with references to the classic horrors, most obvious being 'Friday 13th' due to the hockey mask the main character wears (yeah, I know it's supposed to be some ancient power giving demonic mask rather than a hockey mask).


When I got my Virtual Console...I mean Wii, Splatterhouse was the first game I downloaded. The game is really good, it feels like a basic version of Splatterhouse 2, which it is. The music, graphics and everything are just as good.


The game sees you fight your way though 7 levels of monster filled madness to rescue your kidnapped girlfriend, main enemies being various types of zombies. There are multiple routes through most the levels, more routes than are present in the sequel in fact. The bosses like the sequel are fantastic show stopping events mostly. Everything from a room full of possessed furniture to a sack wearing corpse wielding dual chainsaws. 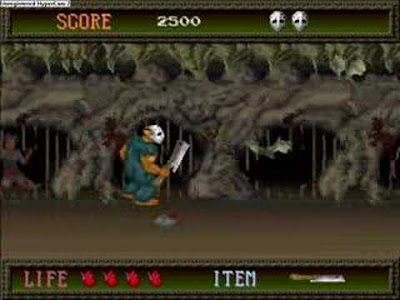 I had hoped the game would be the uncensored version, but alas it was not to be. The biggest fault of the censored version (apart from Rick having a stupid red mask instead of white) I believe is the 4th level boss. Originally you had to fight a floating crucifix surrounded by severed heads in a church. After beating it Rick walks up to an alter and church music starts playing as the church lights up. In the censored version you instead fight a floating blue blob surrounded by severed heads. After beating it Rick walks up to an empty space (where the altar should be), church music starts playing as the place your in lights up (still blatantly a church) and makes no sense whatsoever.

Regardless of this the game is fantastic. I really hope they release Splatterhouse 3 as well on the Virtual Console, that games like gold dust and I have only played it on an emulator before. Also there is a new sequel being created for 360 and PS3, looking forward to that definitely!