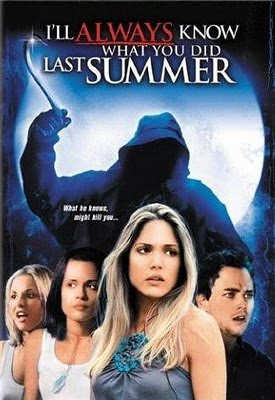 In 'I know what you did last summer' a group of young adults accidentally kill a stranger while joy riding on the 4th of July. They dispose of the body and swear they will never reveal what they did. A year later a killer wearing a fisherman's raincoat, and using a hook starts killing them off one by one. Eventually they discover the killer is actually the stranger they thought they had killed a year previous. During an exciting last battle on a fishing boat the stranger (a middle aged man called Ben) has his hand severed off and is cast out into the ocean. The film came out around the same time as Scream, and was a much more intelligent slasher than that one.
Next came the sequel 'I still know what you did last summer'. In this film the survivor of the previous film wins a holiday on a tropical island, so heads out to it with her new friends. Once there they discover they are virtually the only inhabitants due to it being off season. There are a few skeleton staff running the hotel, and also a killer fisherman with a hook for a hand...after much bloodshed and mayhem it turns out that it is the fisherman Ben who had not died in the first film, and this time he was helped by his son who was masquerading as a friend of the heroines and whose telltale surname was 'Benson' (as in Ben's Son, lol). At the end of the film the son is accidentally killed by Ben, while Ben himself is shot to pieces and falls into an open grave. This was another good film. I saw this one at the cinema. 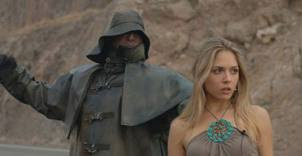 Recently I discovered the third film in the series 'I'll always know what you did last summer'. I watched it in a dubious mood. Surely this would be utter tripe, and completely unrelated to the previous ones?
It actually was nearly quite good. A group of kids playing a prank accidentally get their friend killed. Like the original a year later they start being killed off one by one by a killer in a fisherman's coat, and with a hook for a hand. 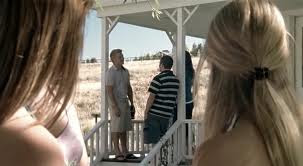 It's the usual (but good) whodunit slasher until near the end, and this is where it gets barmy. Massive spoilers! It turns out the killer is once again Ben from the first 2 films, but this time he's a zombie! He has glowing red eyes, rotten skin, able to teleport, and unkillable, even when chopped into little pieces he comes back. What the hell!??! Heh, the first two films were 'realistic' in that it was all plausible, but this is such a total curve ball, and fits in really badly to the tone of the film. Frankly it is just ridiculous! But enjoyable all the same.