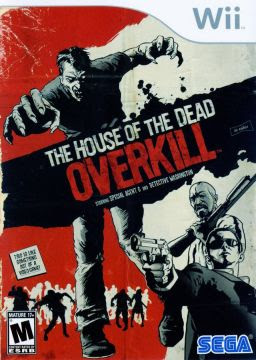 What is this? A decent game on the Wii? What the heck?! The Wii unfortunately has a real lack of good games, and even less so called 'hardcore' games. It does have an increasing number of zombie games though.
House of the Dead: Overkill is a prequel to the four House of the Dead games already out. Story has never been the series strong point, basically it is Agent G's (AMS agent featuring in the last 3 HOTD games) first mission. He teams up with a very foul mouthed Detective Issac Washington to pursue a man known as Papa Ceaser though a small town in Louisiana. There is plenty of story before and after each level, and lots of play off between the hot headed Detective, and the almost emotionless G. There is lots and lots of adult language, with one phrase in particular being repeated often. The story is funny, and worth seeing a few times, though as everything it does grows stale after repeated views. 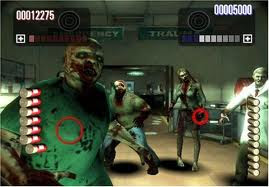 The game is split up into 7 levels, each set in a different location in the town. The variety is nice, each level completely different from the others, and the levels are of a decent length. The characters comment on the action as you progress which leads to some hilarious lines. The game is a light gun game, like the others in the series. The wii-mote works great for this, especially with the hefty feeling 'House of the Dead:Overkill Hand Cannon' attachment which the wii-mote slots into. Each level introduces new enemies into the mix which helps vary them even more so.


After each level you receive cash, based on score, skill and other factors. There is a shop you can visit where your gun can be upgraded in a variety of ways, and new weapons, such as Shotguns, and Uzis can be purchased. This helps with the replayability. Also to help this is the unlockables. Depending on different factors in the levels you can unlock music, artwork, and trailers. Also in addition to the main game, there is a 2nd 'Directors cut' which features slightly extended levels, and more zombies, and some mini games which can be played with up to 3 other people. I don't have any videogame playing friends, but I assume this, and 2 player main game would be a lot of fun. 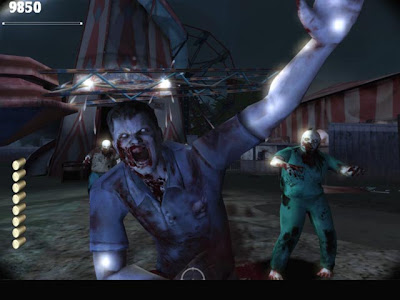 Onto the problems. While the soundtrack is good, and has a grind house sound to it, many of the tunes are repeated from level to level, and also the tracks are too short for the levels, so there's times when the song ends when there's just silence on screen until it starts from the start again. The game has a few issues of loading when the frame rate drops at certain points during the game. Being a Wii game it looks good enough, and has a cool grainy look going on, but I wish that the environments had been a bit more destructible, and the enemies as well. Previous games let you blast holes in the enemies and destroy lots of back ground objects, but here the enemies pretty much just fall apart when you shoot them, and windows are the only destructible objects.


The enemies show far less variety than the previous installments, mostly just being a variety of slow and quick moving zombies. The bosses are really easy, and not at all memorable unlike the previous games. Lastly; there are no alternate routes through the levels, this was kinda a hallmark of the series, so is missed. 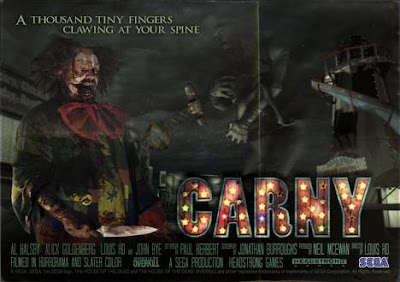 Don't get me wrong, the game is fab, it just doesn't feel like a House of the Dead game really, but as a zombie game it is really good, and would probably be fantastic in 2 player.

Posted by Daniel Simmonds at 10:10