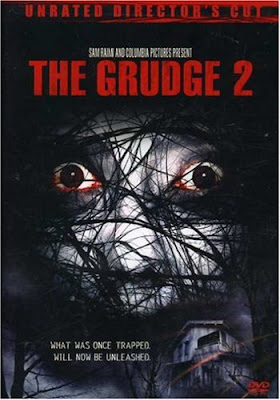 I hated The Grudge. First I saw the Japanese version. I had no idea what the heck was going on, I found it very boring and confusing. I got the American remake thinking that would be better, but no. The American remake was near identical, it was very boring and confusing. I brought The Grudge 2 a long time ago purely because it was cheap, it hadn't even had its packaging removed. I finally decided to watch it last Saturday, and I must admit I was pleasantly surprised.


The Grudge for those who don't know is a Japanese based haunted house story basically. There is a house which curses any who enter it. All visitors to the house become haunted by strange apparitions everywhere they go of the family who were murdered in the house. 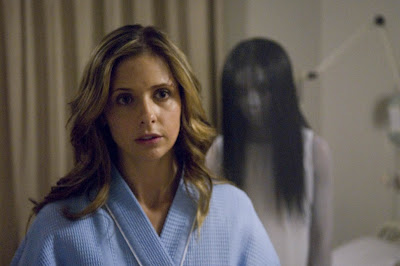 The film has 3 different story lines going on. The first storyline sees Sarah Michelle Geller's character currently under police guard in hospital. Her sister heads over to Japan to take her back to America. The 2nd storyline concerns a group of school girls who head into the house from the original film to play a prank on their classmate. The 3rd storyline is set in an apartment building in America, and the spooky goings on there. The story lines seem at first unrelated, but are cleverly interwoven.


The films story is nowhere near as confusing as the original, and is all the better for this. It's also a scarier film than the original, though it only made me jump on the one occasion. 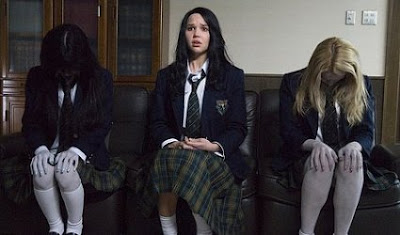 There are quite a few extras on the disc, of which I didn't actually watch. I did see the alternate ending though, and it really is an alternate ending. I can understand why they decided not to use it. I really hope they make The Grudge 3!

I really wanted to like The Grudge but I just felt so disappointed by it. I have always found things to like in the later films. I loved the bits in the American apartment building. I only saw the movie once and didn't actually read the (no doubt awful) review my less experienced past self wrote but I have fond memories of this one even if I don't think it is amazing. I have never actually seen the alternate ending, it is a rare beast where the alternate is better than the actual one!

I'll butt in on this one as I am a self-professed Ju-on veteran. See, Gabriel claims that he doesn't like The Grudge 2, which, in my eyes, is superior to the 2004 remake, and dare I say it, the scariest American horror movie in existence, because of the non-sensical ending regarding Allison's death. Let me clear one thing up: it's actually the ending of Ju-on: The Grudge that is being used here. In the original 2002 horror movie, the "main" character, Rika, suffers the same fate. Upon glancing in the mirror at the Saeki household, we are introduced to flashbacks that show us Rika being the one haunting the other characters in the movie. The same is done in the ending to The Grudge 2. It's incredibly confusing, as it pretty much gets rid of Kayako. Does it mean that Kayako is really a manifestation of the curse, or is the first person who enters the Saeki households ends up doing the haunting, being influenced by the curse that manifests itself as Takeo, Kayako's husband? It's incredibly confusing to say the least, but I think that's the charm of the Ju-on/The Grudge movies! Hope I cleared that up somehow.

People like you make the world go round. It’s been so long since I’ve seen it but I will take your knowledgable word on it as sounds cohesive.