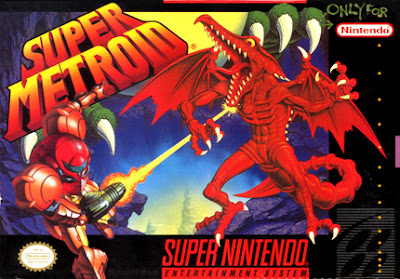 I recently finished Super Metroid for the first time ever, kudos to me! Back in the day I had borrowed a Super NES and this game off a friend. I had really liked it, but after a week I had given the console back and so never got to finish the game.

Last year, or maybe the year before that Super Metroid was released onto the wondrous Virtual Console. I had plenty of trouble with the controls, and after a few hours I gave up on it to my shame. Towards the middle of last year I started a new game, did over half of it, then promptly forgot all about it until last week when I revisited it and finished it off. 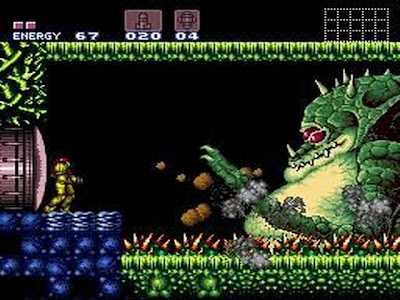 The game is sublime, I do admit I mostly like it because of the obvious influence it has had on the Castlevania games. A 2d platform action game set in one massive level, fantastic!


The game sees you as Samus a bounty hunter. Responding to a distress signal from a Science HQ space station, you arrive to find all the scientists dead, and a Metroid (a rare parasitic life form) on the brink of being stolen by a giant alien bird - Ridley, who is a leader of the Space Pirates. After a brief battle Ridley escapes with the Metroid and heads to a nearby planet (the Metroids home world, and Space Pirate base). Chasing him you land on the alien planet and the adventure begins.


As is the now legendary style of the Metroidvania games the action as stated takes place over one massive level, broken down into smaller areas. As you progress through the game you discover upgrades for your space suit, new weapon attachments., and health power ups, half the fun of these type of games is the exploration. The game is very atmospheric, the music fits the different locations very well. Locations are varied and range everywhere from lava caves to derelict spacecraft. The sound effects are top notch, especially the automatic doors which link all the 100's of rooms together. 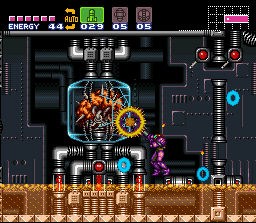 The very best thing about this game are the bosses! There are so many varied bosses in the game, all are fantastic, and a joy to fight, this game has a stupidly large number of fantastic enemies, everything from giant man eating plants, to Mother Brain itself. The last section of the game is absolutely fantastic. I really recommend this game, while the Sci-fi setting isn't as good as the Gothic setting of the Castlevania, it handles it very well. The GBA Metroids were good, but not a patch on this, the best!