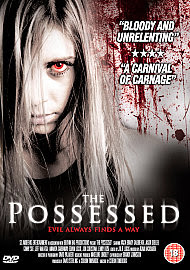 The Possessed is clearly a film made on a tight budget. It looks terrible, has mostly terrible acting, and the plot is all over the place. Characters seem to teleport from location to location which makes things more confusing than the near empty plot.


The film starts with a hideous music video. After this bizarre intro a small flat is shown. The depressed female singer of the music video calls her boyfriend into their bedroom before committing suicide in front of him.


Several months later her boyfriend, and the other band members visit a psychic, the best character of the film. The psychic is a flamboyant theatrical man, wearing clown make up, quite freaky looking. The band members have visited him to find out if their dead band member 'Cassidy' is ok for them to start up the band again, having stopped it after her death. The psychic seems to get possessed by the spirit of Cassidy and tells the members that their all going to die. They ignore him as a crank and head off to their friends recording studio. Soon the spirit of Cassidy arrives and starts her killing spree...


As mentioned the film is extremely badly acted with the exception of a few characters. I really don't understand what the point of the film was, but I still enjoyed watching it. The special effects are quite bad, I still guess I recommend it though.