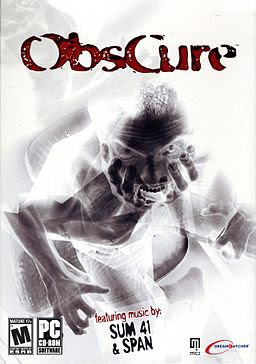 Obscure is a survival horror which was released on the Playstation 2, X-box, PC and maybe Gamecube a few years ago. The game is unique in that it is actually a 2 player game. If you don't have a friend to play it with then the 2nd character is controlled by A.I, and you are able to switch between the 2 characters with the touch of a button.
The setting of the game is a high school. A group of students hide behind after school one day to search for their friend who has vanished. The school has a long history of missing students, so they figure that seeing as the last place they saw him was the school gym that it's likely he is within the school grounds somewhere. Unfortunately the night they chose to hide out in the school is the same night that the school suddenly becomes over run by strange monsters. As well as the 5 students being in the school, several teachers have also become mixed up in the madness. 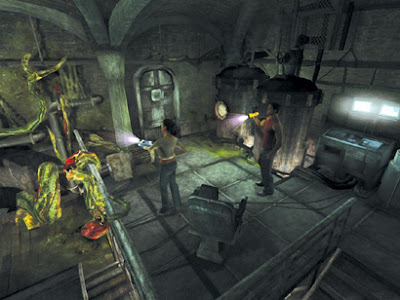 The game is a mix of puzzles and combat. The combat is not really a strong part of the game. The enemies are allergic to light, so at first seems a bit similar to 'Alone in the Dark' (The Dreamcast and PSOne version at least). There's some clever touches such as smashing grubby windows to flood rooms with sunlight. As the game progresses the sun goes down, so for the 2nd half of the game this cant be done. There are 5 different characters you can play as. They all have different special abilities, but you never need a specific characters abilities, so any 2 will do.
The puzzle elements are quite simple, and the map you have always clearly shows you where to go next, the game is also quite short. Despite this I had a lot of fun with it. The story while not original was sufficient to keep me wanting to play. The A.I is kinda terrible at times, I assume it would be more fun in 2 player.
There is a sequel, I believe it's called 'Obscure: The Aftermath'. I think its on the PS2, X-Box, and possibly Wii. If you see the game cheap - get it!