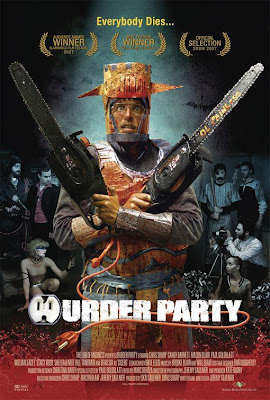 It's been over a month since my last post, I really need to keep this updated. I have quite a big list of things to write about now in the world of horror.


Murder Party is a horror laced with lots of black humour. A 30 something nerd (Chris) is on his way back from his job as a hated traffic warden on Halloween when he happens across an invitation to a party titled 'Murder Party'. Being the lonely guy he is, and having no better option other than to sit at home and watch some newly purchased horror films he decides he will go. He makes a Knight costume out of a cardboard box which is hilarious looking in its pure rubbishness, then heads to the address on the invite.
The party is in a rough industrial area of New York, eventually he finds the place; an old dilapidated warehouse. Inside he comes across the party. A group of odd art students. Their costumes are quite cool, ones dressed as a baseball gang character from The Warriors, a girl dressed as a Replicant from Bladerunner, as well as a Vampire, Werewolf, and a Cheerleader. 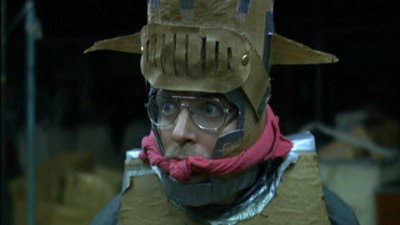 After talking briefly they pounce on Chris, after a short tussle he is knocked out and awakes tied up to a chair, the art students reveal they are going to kill him as part of an art installation there doing to impress their idol who is going to give a grant to the one with the best art installation idea.
Most of the film happens from this setting. Chris spends a lot of the film not only tied up, but also gagged, so it is a credit to the actor playing him that he comes across as such a sweet and likable character despite hardly having any lines at all.
The film as mentioned is darkly humorous, the art students are fantastic characters, and as the film progress become increasingly bitter and shallow, showing their own insecurities as they are killed off one by one, mostly by hilarious accidents. Also the fact that during the entire film Chris never takes off his amazingly funny cumbersome, cardboard Knight costume is a very cool touch
The films obviously been made on a budget, most the action takes place in the one location, but despite this the acting is of a very high quality, and the look of the film is very sharp. The plot is quite simple, but the life the actors put into the characters make the film seem such a breath of fresh air. The film is quite bloody and violent, especially later on, but is only a 15 which I found surprising. A surprise hit I thought.