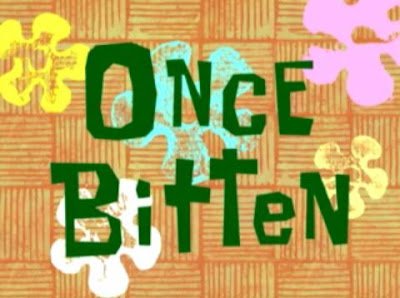 I love Spongebob, and today I saw a zombie themed episode, woop!

In 'Once Bitten' Squidward gets bitten by Spongebob's pet Snail Gary - who had been acting strangely. Patrick identifies Gary as having mad snail disease, and tells Squidward that anyone bitten by the Snail will turn into a zombie. Gary wanders off, and soon is biting people in the town left right and centre.

Hysteria ensures as everyone bitten, and a vast majority who haven't start to think they are zombies. Soon the survivors are all holed up in the Krusty Krab.
Spongebob, pursued by zombies led by a zombie Squidward manages to get there as well. 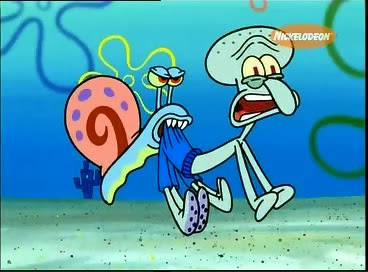 While the Krusty Krab is under siege by the zombie hordes the survivors start to doubt whether they themselves are not zombies and just haven't realised it.

It all comes to an end when one of the survivors steps forward and introduces himself as an expert on Snail diseases. He explains there is no such thing as mad snail disease, and that Gary had been biting everyone as he had a splinter in him. Realising this the zombies all turn back into their normal selves.

Was a fun little episode.
Posted by Daniel Simmonds at 10:01

it's an amazing tv show. really it's an fantastic tv show.SpongeBob is a very popular show.i also Watch Spongebob Squarepants Online and also Download Spongebob Squarpants TV Show Everyone should see this show.