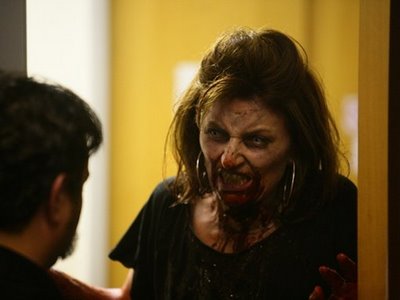 A fantastic episode of Dead Set today! Only one more left now. The plot is so well suited to a short series!


At the studio the producer and evicted finally kill Davina and make it to the control room where they contact the Big Brother house and get rescued by them. The producer makes a plan to escape the confines of the house and its grounds and escape to a port. The episode ends with the boyfriend making it to the Big Brother grounds, but looks like he may be mistaken for a zombie in the cliff hanger ending.


There was a lot of action in this episode, plus a fantastic guest appearance by zombie Brian (winner of a previous Big Brother). Very funny in places, surprising seeing as how bleak and downbeat a lot of the programme is, and how seriously the zombie invasion has been portrayed.
Posted by Daniel Simmonds at 15:31