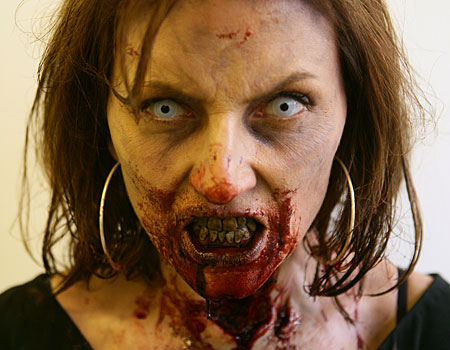 It turns out the first episode was actually a double length one. The normal length is about 25 minutes. This episode was less action than the last one.


It followed three different sets of people. The Big Brother producer, and latest evicted housemate hang out in a room under siege by zombie Davina, the staff survivors boyfriend out in the middle of nowhere hooks up with a very moody woman and spend several hours trying to get a car started. The main story revolves around the Big Brother contestants and the staff survivor.


In this episode some of the survivors head of for a nearby chemist to get medicine to help cure one of the contestants who has been bitten. I'm assuming the bitten woman is going to turn into a zombie. Joplin is still my fave contestant, while the Big Brother producer is still the funniest character. Look forward to tomorrows episode!


Having spoken to different friends of mine one loved the programme, while the other said she thought it was rubbish, I think it is ace, and have already preordered the DVD of it (released next Monday).
Posted by Daniel Simmonds at 15:32