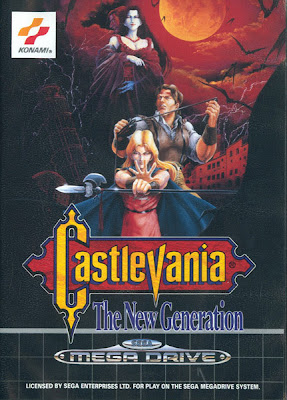 Some games don’t actually feature Zombies! Can you believe that? But some games do have Zombies, even if they only have a token appearance. The game in question for zombie cameos this time is Castlevania: The Next Generation (or Bloodlines if you’re American) on the Megadrive/Genesis. The game sees you pursuing Countess Bartley across as she gathers up the pieces of Count Dracula in order to resurrect him once again.

The enemies in this game mostly consist of skeletons, and various other types of creature such as bats, beast men, and knights. Zombies show up on level 1 as the first enemy you face. Level 1 is the ruins of Castle Dracula (or I guess the ruins of Castlevania unless Dracula lived somewhere else before Castlevania). Anyway as either John Morris or Eric Lecarde you enter the castle grounds. After a brief courtyard walk you enter the entrance hall of the castle itself. Zombies constantly run up to you from both directions, they don’t actually have an attack, I assume they try and bite you or something. Some of the zombies have flies buzzing round their heads which is a cool touch. Being the first enemies of the game they are very weak. They fall apart with just one strike of the whip or pole arm.

And that is it for the Zombies appearance in the game as far as I recall! The rest of the level has mostly skeletons, some fish men, some bats, and a sub boss of a demon hound, and the main boss of a possessed suit of armour.

Level 4 (The German Steel Works) has a Frankenstein sub-boss, but I don’t count him as a zombie (anyway he’s like 15 feet tall) and there are a few mummies on Level 3 (The Leaning Tower of Pisa), but they don’t count either.

The game is good, a bit zombie light, but then zombies are not the point of the game, I see them as an added bonus.
Posted by Daniel Simmonds at 06:29