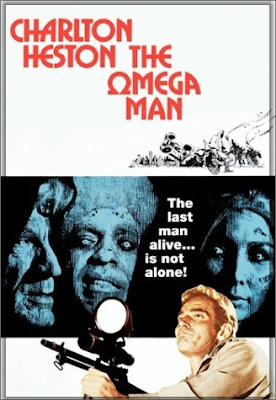 The Omega Man like 'The Last Man on Earth' before it, and 'I am Legend' afterwards is based on the novel 'I am Legend' about a man trying to survive in a world where he is the last human.

In 'The Omega Man' a man made bio-weapon has swept the globe infecting everyone. Most the worlds population died instantly, but some survived, but only as 'others' - psychotic albinos allergic to light.


Charlton Heston plays Robert Neville a scientist who survived the epidemic by using a experimental antidote. His days are spent cruising the deserted city gathering supplies, and hunting for the 'others' nest so he can eliminate them. His nights are spent barricaded in his fortress home playing chess with himself, and getting drunk while foiling the 'others' attempts to break in and kill him.


He meets up with a small band of humans who are only in the early stages of infection, and so not yet deranged. They give Robert a purpose in life, and after successfully creating an antidote he plans to leave the hellish city and head for the hills with them. But things might not go according to plan...


The music in this film is amazing, it is so beautiful 70's style western music. Specially during the action sequences where rather than have balls out fast paced music there is really meloconic haunting themes which really make you care for the character of Robert and want him to win.


An ace film, recommended. Better than 'The Last Man on Earth', and that itself was a classic film.

Posted by Daniel Simmonds at 11:27