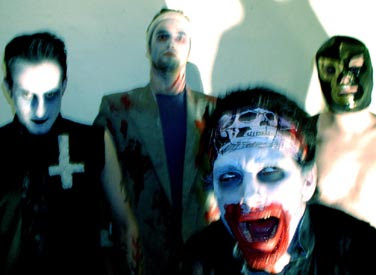 Send More Paramedics are the best ever Zombie band in my opinion. The name for their band is of course taken from a line in the fantastic 'Return of the Living Dead'.

In the film the humans have called for an Ambulance to help their injured friend. The Ambulance turns up, but it's crew are quickly eaten by the undead. A zombie gets on the Ambulances radio and shouts into it "send more paramedics!". Another Ambulance is dispatched in response, and the crew of that one are also quickly eaten, a classic scene.

Not only are Send More Paramedics actually real (Un)life Zombies (or least claim to be), they don't hide the fact, and sing like Zombies as well. I guess it's just a shame they have split up, though hopefully not literally.

This song is a description of a classic Zombie uprising. Includes a line taken straight from 'Dawn of the Dead'.

Walking dead
With suppurating wounds
Disfigured shapes
Illuminated by the moon
A reckless haste
To feast on human flesh and blood
All thought erased
Except of you...
Freak disinterment of the dear departed dead
Your late lamented relatives are racing to devour your head