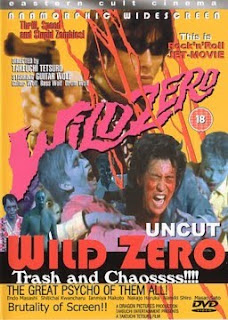 Trash and chaossss!!!!
Here is the blurb from the back of the case:
"Dastardly aliens are invading our planet making the dead rise from their graves to feed on the flesh of the living!!!
When wannabe rocker ACE unwittingly saves his rock'n'roll superstar heroes, GUITAR WOLF, from a backstage shootout with the maniacal CAPTAIN, he has the honour of becoming thier blood brother.
Answering Ace's distress call from a special whistle, the super group charge in with guns and guitars ablazing!
With help from YAMAZAKI, a sexy arms dealer, and TOBIO, a girl who is more than she appears, the ground is soon awash with blood and guts as the ROCK'N'ROLL HALEY'S COMET explodes into action!!!!!!!"

This film is ace, it really is something special. It stars the real life rock and roll super group Guitar Wolf who play as themselves in the film. The soundtrack is mostly made up of their crazy retro rock and roll songs. The music perfectly matches the crazy carefree attitude of the film. The dialogue is fantastic, and completely over the top, but gloriously so.
There is lots and lots of head poppin' in the film, every couple of seconds it seems another Zombie gets capped, so is a fun blood bath. As the film goes on, the sci-fi element comes into it more and more, leading to a totally ludicrous but great ending.
Highly recommended, a very fun film!

Crazy film with a great soundtrack
Posted by Daniel Simmonds at 03:33